Early spring marks the beginning of mud season, as well as “sugaring” season in Vermont. With snow still on the ground, farmers in the Northeast Kingdom gather friends and neighbors for the annual run-of-sap from the sugar maples. I had the opportunity to join this gathering when I was invited to photograph the annual run and local farmer Andy Paonessa’s traditional sugaring process.

Living in Boston, this was not the kind of run I was used to: there is no spandex, gel nutrition packs or running shoes. The shoes of choice are muck boots. Like a marathon, the process could make or break a small farmers’ season. There is a short window when the sap from mature sugar maples runs up the tree from the roots to bring nourishment for the year. If trees are tapped too early, freshly-drilled holes will scab over and not produce sap.

I first met Andy through his brother who was a friend of mine from college. Andy’s traditional method for sap collection – using buckets and spiles – has fallen out of favor among mid to large scale producers, who opt for less labor-intensive sugar lines. Once trees are tapped with spiles (spigots that enable collection), the clear, thin sap is boiled down to create the sweet and delicious liquid we all know as maple syrup. During my visit, the maples had been drilled only days before.

Sugaring is part art-form and part science: farmers need to know the right time to tap the trees, where each tree should be tapped and in how many places. There are rules of thumb, but most folks rely on instincts and knowledge of the land. The Old Farmer’s Almanac may serve as a jumping-off point, though nothing beats a seasoned syrup-maker’s ability to read the signs from nature.

Come harvesting time, everyone pitches in to get the work done: Andy had his neighbors, friends from college and even their children lend a hand. It seemed to be more of a reunion; a celebration of spring and putting the long dark winter in the past.  Our day started early with herbal tea and anticipation of the work ahead. Before we headed out to the fields, the goats needed tending. Andy and his girlfriend keep goats for milk and the production of dairy products. Once the goats were fed, it was time to start the tractor, which would take us to the upper fields where the sugar bush lies (a sugar bush is a grove of sugar maple).

The tractor and the house were both new luxuries for Andy, who lived in a tent for nearly ten years with only a wood stove for heat.  Before he bought the old tractor, Andy used a mule for most of his hauling needs. As the tractor started, the silence of the chilly morning was broken, and I did not know what to expect. This was all new to me - as evidenced by the running shoes I was wearing for the day’s work. Luckily, Andy took pity on me and lent me a worn pair of muck boots that were left behind by someone (and were only two sizes too big). Andy manned the tractor like an old-pro and pulled up to the nearest tree in the sugar bush. There was excitement as the first bucket of the season was carefully removed from its hook and we spied our initial glimpse of sap.

After a bit of debate among the veteran harvesters, everyone seemed to be pleased with the bucket. A proclamation was made that this should be a good season. The liquid we collected was then dumped into a large holding tank that was pulled behind Andy’s clattering tractor. One bucket down, only a few hundred more to go. The group fell into a rhythm, removing buckets from hooks, adding the liquid to the holding tank and moving to the next tree as the tractor inched forward.

Before long, I was one of the crew, helping with buckets between making images and documenting the process. The color and the texture of the sap surprised me.  The sap was thinner than I imagined, I had pictured the sticky amber that oozes out of pine trees. This was a clear substance with a viscosity similar to water. I was told I could taste it, and discovered that it was sweet, but not too sweet, and sticky – like the simple syrup used by bar tenders.

All the buckets had to be collected and reset on the spiles before noon for the next day of sugaring, the seasoned helpers in our crew made light work of this task. When we were finished, our group and the tractor lumbered back down the hill to the sugar shack that sits on the edge of the field alongside the dirt road. It was now lunch time. Since I had traveled up from Boston the night before, I did not think to pack a lunch. On my way to the farm, I grabbed some chips and a drink from a general store that was open in the early morning hours. There was no real lunch break, except among the kids, who enjoyed drink boxes and prepared sandwiches. Adults ate fruit and vegetables, crackers and grabbed hunks from the big block of Cabot cheese and homemade loaves of bread. All this was washed down with local hard cider or ale and some water from reusable bottles.

The heavy lifting of collecting was done and the cooking of the syrup took on a more relaxed air. Friends talked and reminisced, dogs played out front and people picked on their instruments playing mandolins and banjos while Andy prepared to cook the syrup and lit the large fire beneath the boiler. Once the fire was lit and the boiler was up to temperature a pump and hose were produced from a cabinet in the shack, the freshly collected sap was pumped into the boiler to start the sugaring process. The thin light sap was boiled into the thick golden brown syrup we put on tables to enjoy with pancakes or waffles. I quickly learned that the cooking process for the first batch of the season is intense. After all, farmers go almost a whole year between sugaring seasons, and the process has to be done precisely. Throughout cooking, the sap needed to be mixed and stirred so it didn’t burn. A close eye needed to be kept on the readings from the pressure and temperature gauges. The fire needed continual stoking and a hydrometer was used to measure the syrup to make sure the viscosity was right. When the hydrometer indicated that the cooking was finished, syrup was tasted before being emptied from the boiler into strainers. Then, it was graded and bottled. All of this was performed on site, inside the tiny sugar shack.

I got to taste the final product, which did not disappoint. After a long day, it was time for me to say goodbye. Due to the generosity of Andy and his harvesting crew, I took away a lot of lessons learned and made some new friends. I did however, leave the muck boots behind. 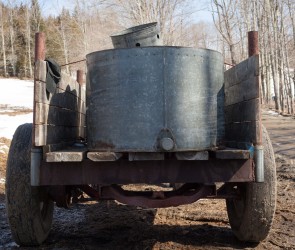 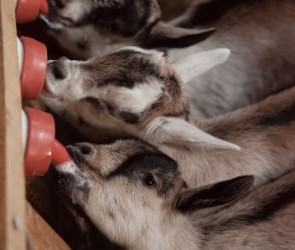 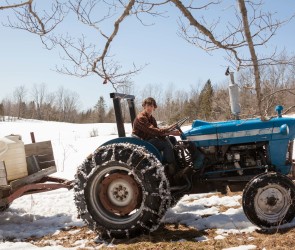 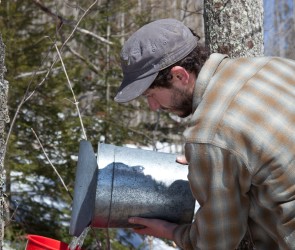 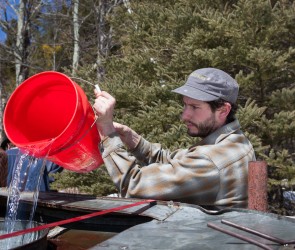 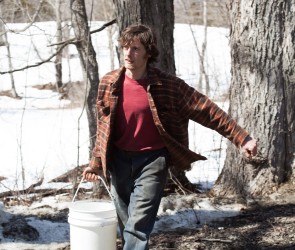 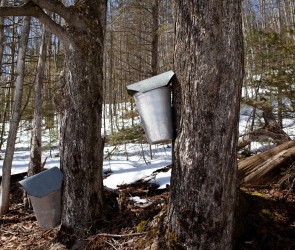 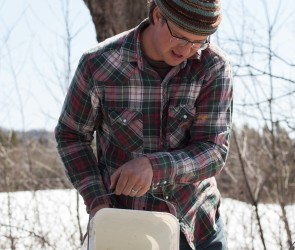 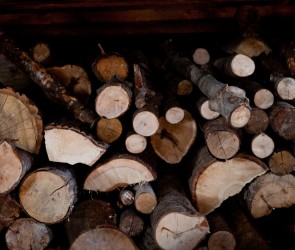 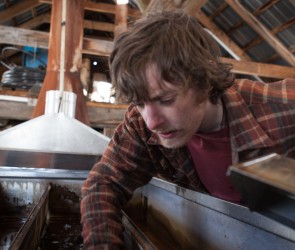 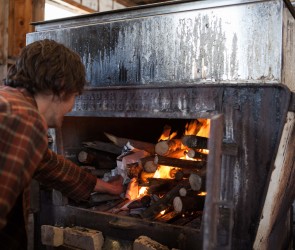 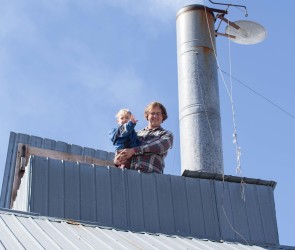 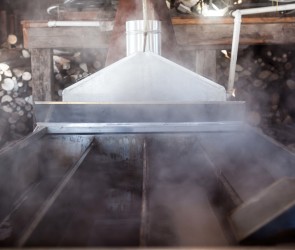 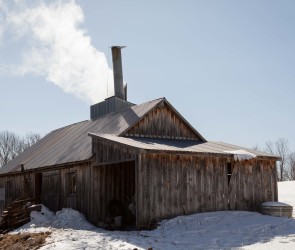 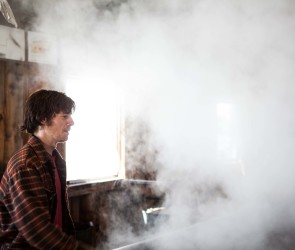 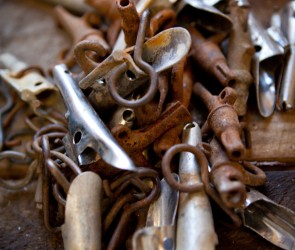 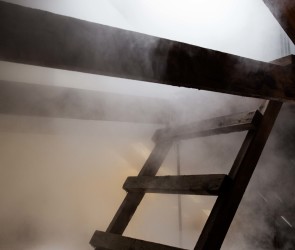 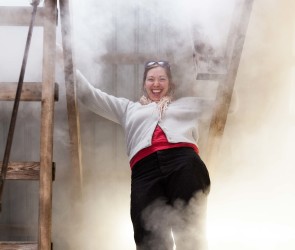 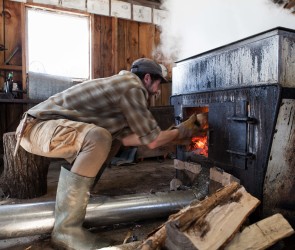 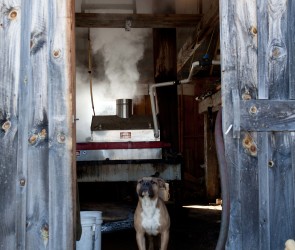 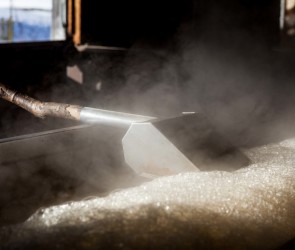 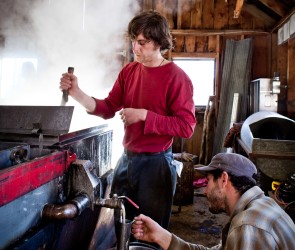 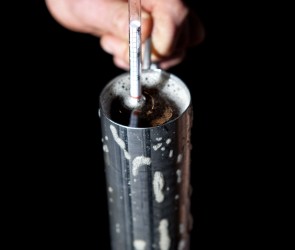 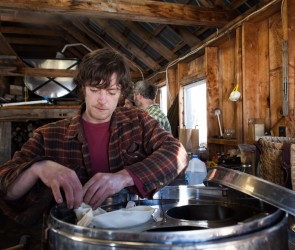 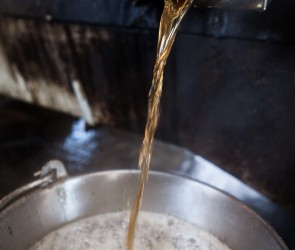 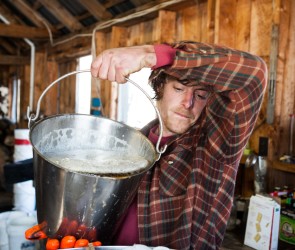 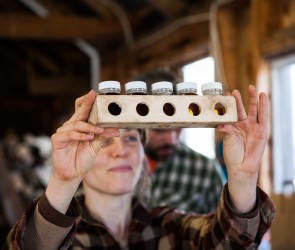 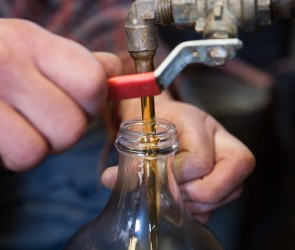 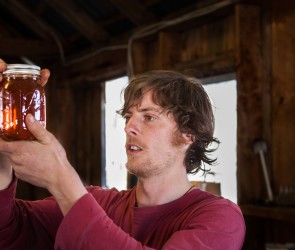 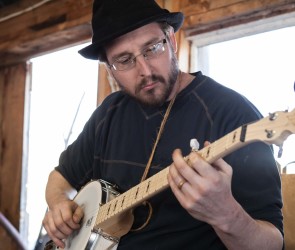