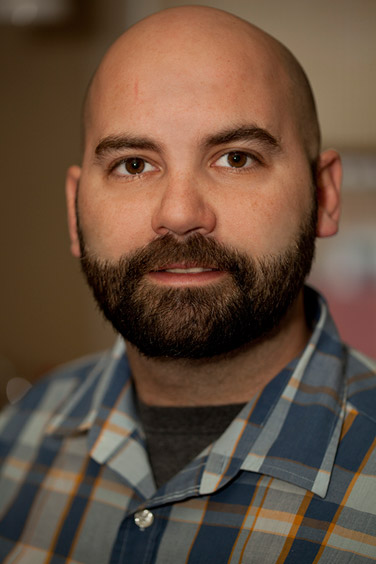 Brian Wilson received his BA in Graphic Communications Design with a photographic concentration from New England College in Henniker, NH in 2002. In 2003 Brian moved to Philadelphia where he ran a successful commercial photography business with a focus on food and editorial content. In 2007 Brian became one of Princeton University’s photographers were his passion for science and research was reignited, which lead to focusing his art practice on a research-based approach. In 2013 Brian left Princeton for a Medical Photographer position with Massachusetts General Hospital where his research-based artwork could be further explored with the help of ocular surgeons. Brian is interested in theories and science that explore sight and visual perception. This area of interest stems from his father’s visual impairments, as he is both color blind and legally blind in one eye. Brian often wondered how he saw the world, so he developed a “lens-less” camera that mimics the light transmission from the cornea to the retina without passing through a lens.  The work for this project has been shown in national and international shows including Persistent Memories in Boston, MA, The Incubator 7 art festival in Valencia, Spain and the Photography Now exhibition in Cambridge, MA where his work received the Juror’s Choice Award. Brian received his Masters of Fine Arts at Lesley University College of Art and Design (formerly Art Institute of Boston) in January of 2015; his work challenges our vision and perception of the world around us.